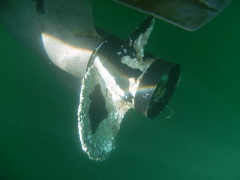 Stray current, dissimilar metals, salt water or galvanic corrosion... it can get very technical and complicated. However the solution is very simple: anode monitoring and replacement when needed. Remember, our divers are your eyes underwater. We can provide you with anodes, or you can provide your own.

At Scuba Duba, we carry an inventory of more than 150 types of anodes for many types of vessels, and we have years of experience in proper installation and replacement of anodes.


CORROSION:
"The destruction of a metal or alloy by chemical or electrochemical reaction with its environment."

It is fairly difficult to glance at a failed metal boat part and tell immediately what caused that particular failure. Most likely the failure was caused by a combination of reasons, including wrong choice of alloy by the manufacturer, manufacturing error, such as overheating, contamination or wrong coating, error in application by the boat builder, water velocity, impurities, or pollution in the electrolyte (sea water), temperature, vibration, stress, crevice, galvanic or stray current corrosion.

GALVANIC CORROSION:
A natural phenomenon is that two different connected metals immersed in sea water, or electrolyte, develop voltage and current. The metal that is most active electrically (more positive) will deteriorate while protecting the metal that is less positive. If both of these metals are important to us, we can attach another metal, more positive than the other two, which will deteriorate first and protect the more important metals. This sacrificial metal will erode, protecting the boat metal that is bonded to it and exposed to the same body of water. 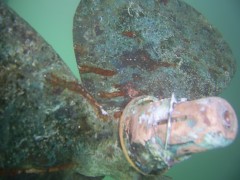 Stray current corrosion is similar to galvanic corrosion, except that the voltage and current flow is created by an outside electrical source rather than spontaneously in nature, normally with much more force than galvanic action and can deteriorate our valuable boat metal in a very short period of time.

MECHANICAL CORROSION:
Turbulent water, high velocity water (especially at bends in cooler tubing), and silt laden water will all cause erosion of metals. Uneven velocity inside a tube or across metal surfaces of boats in tidal water or drifting will also cause erosion. Propellers have several special problems, in that they have large uneven surfaces exposed to tidal currents which causes temperature and electrical differences on different areas of surface, and also differences in voltage due to the different speed between the hub and blades. Besides balancing the shaft and propellers, bonding, using shaft straps and an anode system will normally keep propeller erosion to a minimum by evening out the voltage over the entire propeller surface.